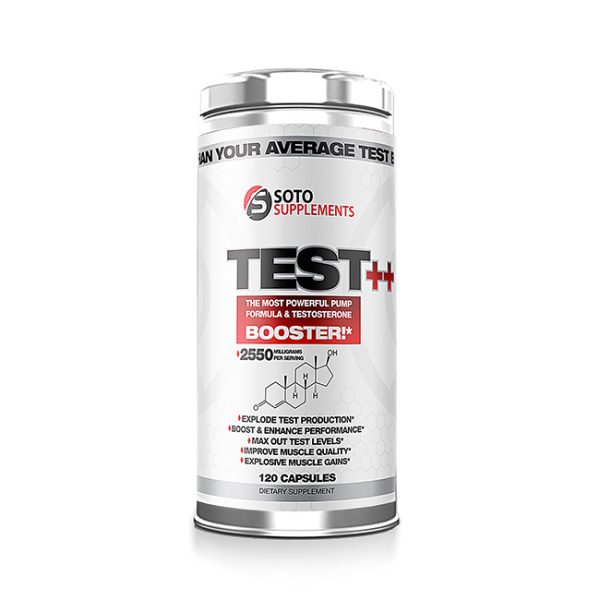 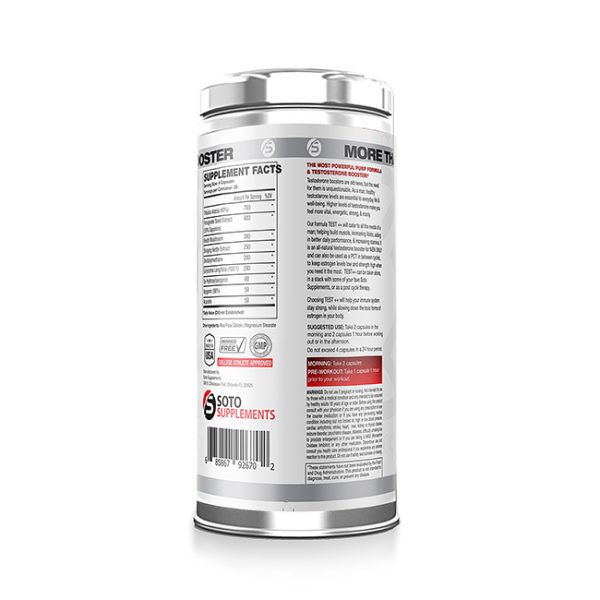 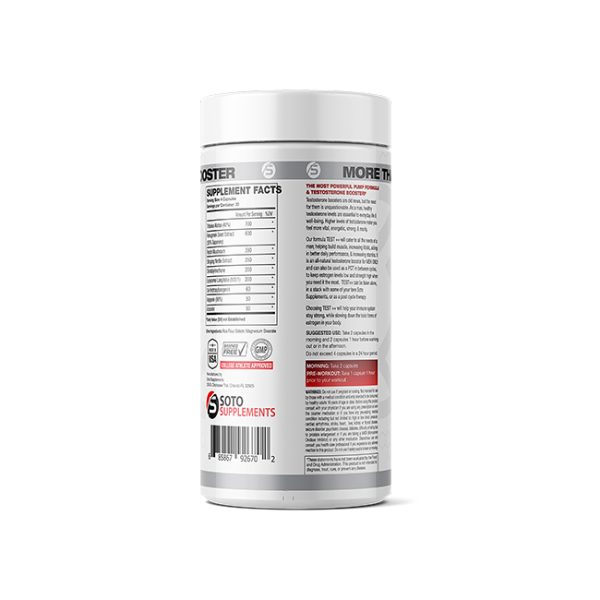 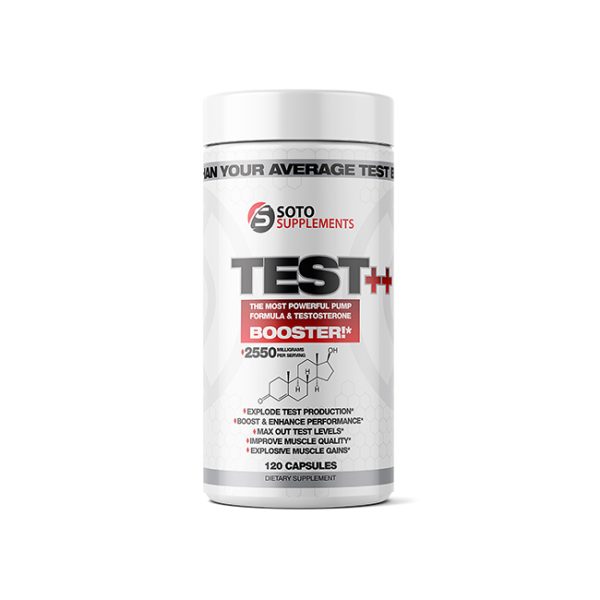 Test ++ is not just another testosterone booster. It is a naturally formulated product that will aim to raise free testosterone levels, while crushing estrogen levels and conversions.

We have researched the best ingredients in the market along with production techniques that are unique to our brand, to ensure you have the best testosterone booster available today.

THE STORY & SCIENCE BEHIND THE CREATION OF TEST ++

The greatest muscle builders of all time have one common endpoint: increasing muscle protein synthesis.  The induction of this process in skeletal muscle tissue is the point of focus of just about every testosterone-boosting product on the market, as testosterone itself, works with the bound androgen receptor to achieve this end.  Test++ does this in a variety of ways, even though some aren’t completely understood, but what we do know is that maximizing testosterone levels has a significant impact on the body’s ability to repair itself after exercise.

The concept of structural homology is a theoretical principle that for any two structures that may exist in nature, (eg. a whale fin and a human hand) that have significant similarity and have similar function must have some shared evolutionary origin.  It also has some implications in the cross-over of structures in the plant and animal world, which is part of the theorized mechanism behind 5a-Hydroxy Laxogenin aka (Laxo). Laxo is actually a variation of what are called Brassinosteroids that come from leafy green vegetables, and probably the whole concept behind why Popeye would eat spinach and become so much stronger so quickly.  Laxo, actually does share some pretty significant structural homology between anabolic steroid hormones, yet occurs in nature, and when taken orally, can increase muscle protein synthesis => increases in muscle size & strength.  This is just step 1 in Test++, and it goes even further based off this simple principle of similar structured compounds eliciting similar effects.

Secondly, there are several naturally occurring compounds that share this same property as Laxo, and they fall into a class of compounds known as “Steroidal Saponins” and are found in a wide variety of plants including Fenugreek and Tribulus.  Fenugreek on its own has shown some efficacy in increasing libido, increasing sperm quality, and in some cases even increasing natural testosterone levels – through processes that still have not been fully elucidated.  However, a similarity between Fenugreek and Tribulus is the presence of a Steroidal Saponin known as Protodioscin.  It is thought that the majority of beneficial health effects and increases in muscle growth are almost exclusively due to this particular compound.  In Test++ we have chosen to harness both of these materials with one slight exception: that instead of using the normal species, Tribulus terrestris – we have opted for its more potent cousin, Tribulus alatus.  It was discovered in 2006, that not only did Tribulus alatus contain the usual Steroidal Saponins found in Tribulus terrestris, but it also contained something even more similar to endogenous testosterone:

It was this stand-out Steroidal Saponin that suddenly created an increasing demand for Tribulus alatus in the marketplace as a proper upgrade to the usual Tribulus terrestris products, and primarily the reason why it is found in Test++.

These first three aspects alone, showcase a much more broader picture into how Test++ increases muscle protein synthesis through utilization of structural homology and how that might have cascading effects into the body’s natural hormonal rhythms.  And now since we’ve explored the possibility of these Steroidal Saponins having a direct effect on muscle protein synthesis through possible activation of the androgen receptor, we now consider what potential rate-limiting factors there might be, and how increasing testosterone levels might be curtailed into negative side effects, and most importantly – how Test++ stops those processes in their tracks.

Aside from Steroidal Saponins, there are other compounds as well that can possess wider variations of structural homology such as sterols, lignans, flavones, and quassinoids.  The first step Test++ takes in accelerating this process is the inclusion of the common Stinging Nettle, Urtica dioica for its particular lignan, 3,4-Divanillyltetrahydrofuran – or DVTHF.  DVTHF is a particular lignan that can do a variety of things, but probably most notable is the occupation and inhibition of a circulating protein called Sex Hormone-Binding Globulin or SHBG.  The job of SHBG is to regulate the rate at which sex hormones, such as testosterone and estrogen are able to exert their influence on cells, which means that it could potentially slow down your ability to see substantial muscle gains.  Test++ blocks SHBG’s ability to slow this process and allows free testosterone to operate freely and unchecked – removing the normal thresholds that your body must surpass in order to put on greater amounts of muscle size.

Now aside from limiting the rate that these hormones can influence muscle tissue growth, the body can also convert any excessive increases in free testosterone into estrogen or DHT (dihydrotestosterone).  This all plays a part in an endocrinological balance, but Test++ has some creative ways of tipping the scales in the direction of higher levels of testosterone.

The blockade of the conversion from Testosterone into DHT is both a good and a bad thing for overall health.  Blocking this conversion can yield some beneficial effects for long-term prostate health, but Dihydrotestosterone is actually 5x more anabolic than testosterone itself.  However, this increase in anabolic potency is not without its own set of drawbacks, as high levels of DHT can make the skin oily, promote both acne & baldness, and can have a psychological impact of increasing aggression.  Test++ utilizes Reishi Mushroom to modulate this conversion in a more balanced way.  It’s not our goal to completely abolish this process from happening, but to mediate it to some degree to pad the blow of any potential negative side effects here.

Similarly to conversion into DHT, Testosterone can be converted into Estrogenic hormones as well via the enzyme Aromatase.  Not only is there a conversion from Testosterone to Estrogen via this enzyme, but other potential downfalls can occur via the Estrogen Receptor itself.  Estrogenic side effects can include water retention, increases in breast tissue development, body temperature fluctuations, and increases in emotional volatility.  Test++ uses a very multi-faceted approach here.  We use the Eurycomanones (Quassinoids) from Eurycoma longifolia jack to inhibit the Aromatase enzyme (one of many proposed mechanisms), but also through a moderate Aromatase inhibitor – Apigenin.  Additionally, we use a substantially stronger Aromatase inhibitor – Acacetin, as well.  This three-pronged assault on the Aromatase enzyme puts a serious dent in the body’s ability to convert free Testosterone into Estrogen, but then we take it one step further to supply a compound from Broccoli, 3,3’-Diindolylmethane, or DIM which diminishes the ability for more toxic estrogenic compounds from being able to communicate with the estrogen receptor.

The combination of these efforts puts Test++ in a category of not just a natural testosterone booster, but also something that promotes muscle growth in general.  By facilitating higher levels of free testosterone, decreasing conversion to DHT, and absolutely minimizing estrogenic side effects – Test++ creates dry, hard, lean gains in muscle tissue that facilitate increase in muscle density and measurable strength.

There are no reviews yet.

Be the first to review “TEST ++” Cancel reply 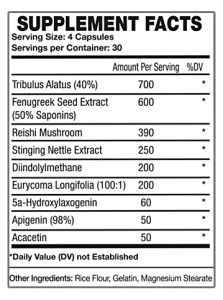